Discovery of the Heungdeoksa Temple Site

Jikji was a collection of crucial excerpts from the analects of Buddha and the Buddhist Patriarchs, and like other books of antiquity, it specifies its publication record, including the publication date and location at the end of the work, noting that “This work was printed in movable metal type at Heungdeoksa Temple outside Cheongju Magistracy in the 7th jeongsa month of the 7th year of Emperor Zhaozong of Northern Yuan China (宣光七年丁巳七月日 淸州牧外興德寺鑄字印施).” This short line confirmed that Jikji, published in 1377 (3rd year of King U of Goryeo), is the world’s oldest extant book printed with movable metal type.

Publication record at the end of Jikji

What kind of temple was Heungdeoksa Temple outside Cheongju Magistracy, the home to the world’s first metal-print publication? Despite strenuous efforts, academics have been unable to identify any records of the temple before the excavation of its site. Details about the temple, such as its exact location, scale, and history, had remained an unsolved puzzle for a long time. Then, thirteen years after Jikji was first introduced to the public in 1972, questions about the temple finally and unexpectedly found some answers, during a construction project for a housing site nearby.

In December 1984, the Korea Land Corporation launched a residential site development project in Uncheon-dong, Cheongju and the Cheongju University Museum conducted an excavation survey of the site. Uncheon-dong was believed to have been the site of a temple due to the discovery of Buddhist artifacts including the Bronze Bell (Treasure No. 1167) of the Unified Silla Period in 1970 and the Memorial Stone for a Silla Temple in 1982. However, no official excavation survey had been conducted on the area. Therefore, the excavation work was commenced with great expectations and resulted in the discovery of a temple site with a main hall, a pagoda and inner gate placed from north to south in a layout that is now referred to as the Uncheon-dong Historic Site.

The excavation team from Cheongju University also surveyed the environs of the temple site and found the foundation stone of a building, fragments of ridge-end tiles, and roof tiles from the Goryeo Dynasty, not far to the southwest of Uncheon-dong. This verified the existence of another temple site near the current Cheongju Early Printing Museum in addition to the Uncheon-dong Historic Site. As the name of the temple was not identified during the excavation, it was named the Yeondang-ri Historic Site after the old name for the area, and various kinds of Buddhist craftworks, roof-tile fragments, and celadon porcelain were unearthed through the excavation work in March 1985. 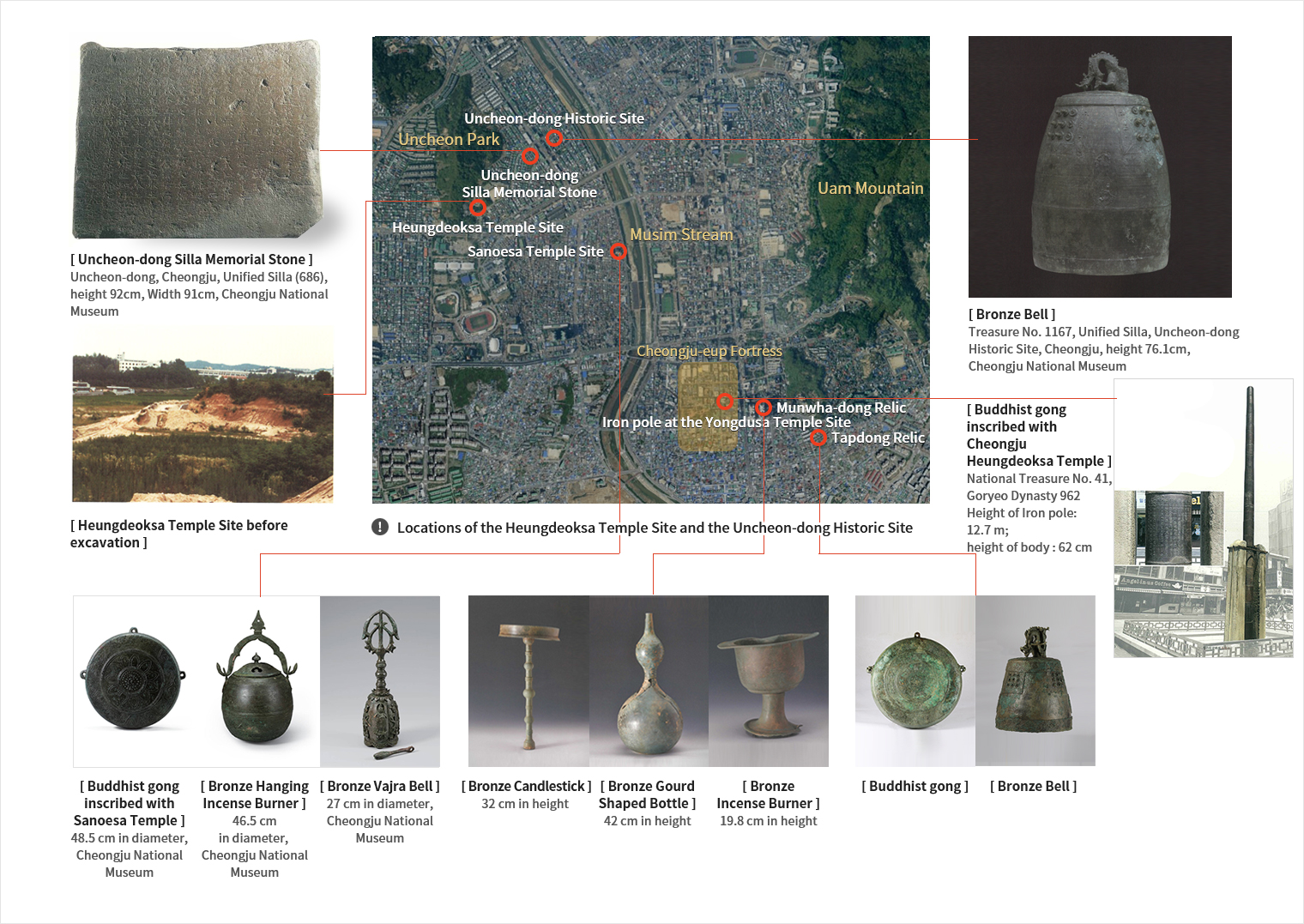 In October, when the excavation work was almost complete, a piece of a bronze Buddhist gong was discovered in the east side of the temple. A bronze gong is a Buddhist instrument used at Buddhist rituals and the unearthed gong was partially cracked at the side, with the whole body missing. This fragmented gong was clearly engraved with the following phrase, “Heungdeoksa Temple of Seowon Prefecture,” which turned the discovery into a historic moment that confirmed the identity of the unidentified temple site as the Heungdeoksa Temple Site, where the world’s first metal type print had been used to print Jikji. The Heungdeoksa Temple Site is situated two kilometers northwest of Cheongju Fortress in the downtown area of the city, which is perfectly congruent with the record of Jikji, which described “Heungdeoksa Temple outside Cheongju Magistracy.”

After the discovery of the fragmented Buddhist gong, in May the following year, the Heungdeoksa Temple Site was officially designated as Historic Site No. 315. The subsequent problem, however, was that some of the soil from the site had already been removed before the excavation. The excavation team surveyed the housing development site to which the soil from the site had been moved, and used a metal detector to find a bronze bowl with the inscription of “Heungdeoksa Temple in the 10th year of Emperor Xizong of Jin China,” which proves that it was made in 1150, reaffirming that the site was where Jikji was printed, which had not been specified in any existing literature.

Without this dramatic discovery, could the true historical value of Jikji have been recognized as it is now? Printed 63 years earlier than Gutenberg’s printing technology, Jikji could not have maintained its present-day recognition if details such as the publishing date, site, and exact present-day location of the publishing site had not been confirmed by evidence. Therefore, the excavation of the Heungdeoksa Temple Site in 1985 greatly contributed to solidifying Jikji’s true value. In addition, it also represents a landmark excavation in that it demonstrated the importance of excavation and inscriptions by locating the undocumented Heungdeoksa Temple Site through inscriptions engraved on excavated artifacts.

Layout and history of the Heungdeoksa Temple Site

The excavation survey at Heungdeoksa Temple identified the sites of the main hall, lecture hall, and western corridor, and a building site with the ground paved with traditional bricks. At the center was the inner gate, followed by a pagoda, the main hall, and lecture hall with corridors on the left and right sides. This layout conforms with the traditional style of temple architecture dating back to the Three Kingdoms Period. It is assumed that each building of the temple underwent some changes through repairing works over time.

As there was a private citizen’s grave at the center of the main hall site, the site was relatively well-preserved and thus the foundation stone and base stones for pillars were excavated in their original states. Small pebbles had been stacked in a square shape to build pillars, which is similar to the style found in the building site of Hwangnyongsa Temple in Gyeongju, which signified that Heungdeoksa Temple could also be dated back to Unified Silla. The temple’s main hall was a structure of five kan in the front and three kan at the side. The bottom stone and the upper stone of the hall’s stereobate were made of granite slabs, and given the placement of natural stone slabs between the granite slabs, it can be surmised that the hall had later undergone repairs at least once or twice.

It was confirmed that, at the Heungdeoksa Temple Site, there had been a lecture hall built in the same period as the main hall, and to the west of the lecture hall, the ground was neatly paved with patternless traditional bricks (32x32x3.5 centimeters). This indicates that there was a small building facing the lecture hall and it was presumably a gambrel-roofed square building with one kan at both front and sides. Some scholars speculate that the building might have been used as a storehouse for woodblocks.

Compiling all of the evidence, Heungdeoksa Temple is believed to have been built around the 9th century, undergone several repairs, and existed until 1377 (3rd year of King U of Goryeo), when jikji was printed. However, as the temple’s name was not found in geographical records of early Joseon, it is speculated to have been lost to fire at some time.

The pinnacle of Goryeo metal craft

At this point, it is necessary to examine the relationship between Jikji and the Heungdeoksa Temple Site in various aspects. As part of this, it is important to investigate the objects excavated from the temple site. At the site, a total of 172 articles were excavated in 100 cases including roof tiles, pottery, and metalcraft items. It is noted that metalcraft items accounted for the majority of the excavated items, including a bronze Buddhist gong with the inscription of Heungdeoksa Temple, a bronze bowl with the inscription of Heungdeoksa Temple, a bronze bell, a vajra, and a bronze dragon head ornament, totaling 93 pieces in 23 cases. In fact, the production of moveable metal type is closely linked with metalcraft technology. Some of the metal items from the temple site bear important inscriptions such as “Heungdeoksa Temple,” or “the 10th year of Emperor Xizong of Jin China (1150).” The intricate and refined quality of these artifacts allows an estimation of the masterful standard and technical prowess of metalwork in Cheongju during the Goryeo period.

The metalcraft items excavated from Heungdeoksa Temple mostly consisted of those used for Buddhist rituals and were mostly made of bronze. Bronze was traditionally produced by alloying copper (Cu) and tin (Sn) or alloying copper (Cu), tin (Sn), and lead (Pb). Bronze has the benefit of melting at a lower temperature than other metals, which make it easy to produce various shapes and engrave designs.

Heungdeoksa Temple’s metalcraft items demonstrate a wide variety of techniques used to manufacture bronze artifacts. The Buddhist gong, small Buddhist bell, and vajra were created through a casting process that pours molten bronze into a mold. The Buddhist gong inscribed with Heungdeoksa Temple bears a lotus pattern on the center and a double vine pattern around it. The delicate and natural embossed patterns elevate the bronze gong to the level of a masterpiece. The bronze bell is small in size and the edge of the top plate is decorated with an S-shaped loop resembling a row of small petals, which is a typical feature of bells manufactured in the late Goryeo Dynasty. 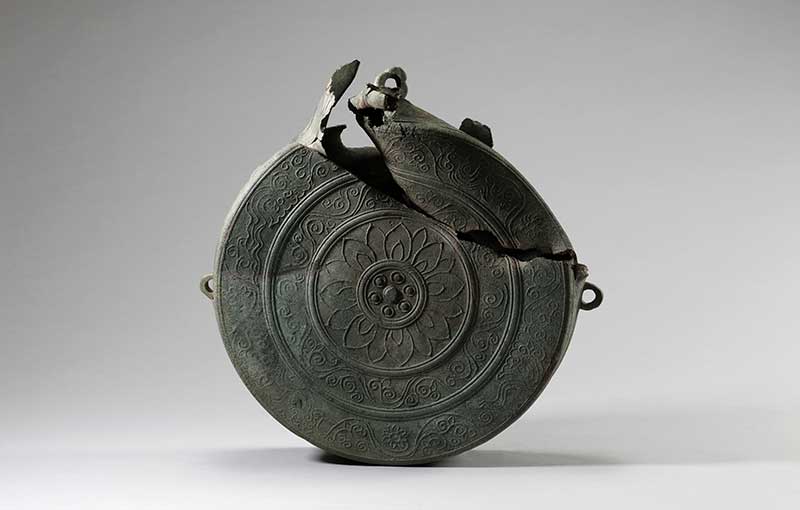 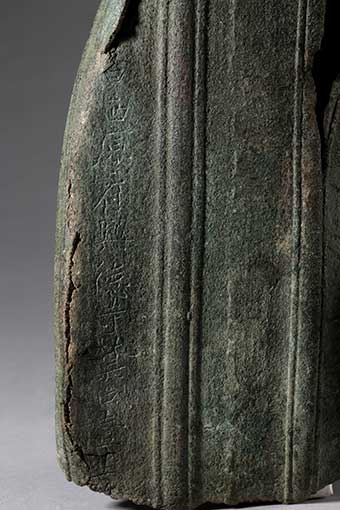 Inscription on the side of the Buddhist gong
“In the 5th month of the gabin year, I remade a Buddhist gong at Heungdeoksa Temple in Seowon Prefecture, and it weighed 32 geun (甲寅五月 日西原府興德寺禁口壹坐改 造入重參拾貳斤印).” 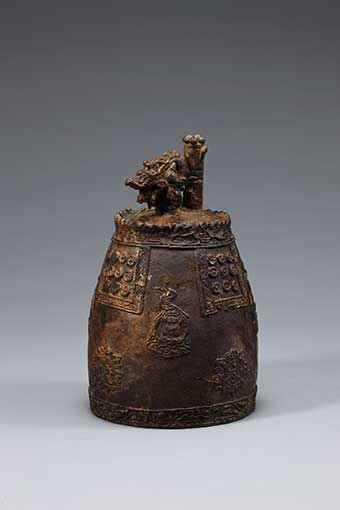 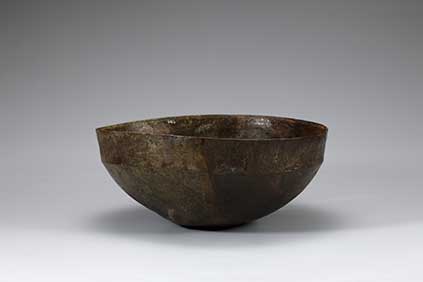 “In the 4th month of the gyeongo year, the tenth year of Emperor Xizong of Jin China (1150), Master Yeongin at Heungdeoksa Temple made a bowl of offering to pray for rebirth in the Pure Land, and the copper used to make the bowl weighed 2 geun 6 ryang (皇統十年庚午四月日興德寺依止重大師領仁往生淨土之愿 佛鉢一盒具鈒雲入重二斤六兩印).”

The bronze bowl inscribed with Heungdeoksa Temple and some other relics were manufactured using a forging process that shapes the metal by hammering it into shape. The bowl was manufactured by spreading the metal thinly to a thickness of 0.2mm, and bears traces of repairs on the surface. For the incense burner, holes were drilled at the top and bottom parts and rod-shaped rivets were inserted into the holes to securely fasten the parts. Riveting is a metal bonding technique that was used often in the Goryeo Dynasty. In addition, traces of grinding to smooth the surface are found on some relics. Inscriptions were engraved using a stippling technique that carves out dots with a sharp, pointed chisel.

The burner’s top and bottom parts fastened with rivets 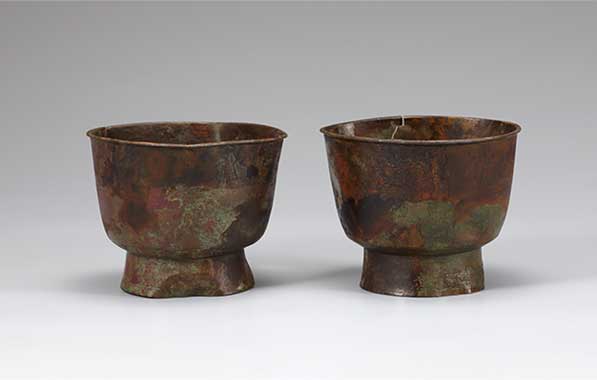 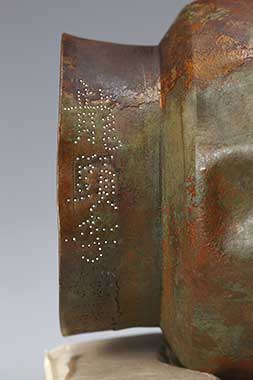 In summary, among the metalcraft items excavated from the Heungdeoksa Temple Site, the bronze drum, bronze bell, and vajra demonstrate elaborate patterns and features of the relevant period, while the incense burner and the bowl with base are simple and practical without patterns or decorations. The metalcraft items from the Heungdeoksa Temple Site can be evaluated as high-quality artifacts created using various metal manufacturing techniques that were available during the Goryeo Dynasty.

Given the high proportion of metal items among the excavated items and the highly advanced manufacturing techniques used on them, it is likely that Heungdeoksa Temple in the Goryeo Dynasty had the right conditions for the robust use of metals and a high standard of understanding and technical prowess with regard to metallurgy. Although further research is still needed, Heungdeoksa Temple and its publication of Jikji, the oldest extant movable metal type book in the world, can be better understood in this context.