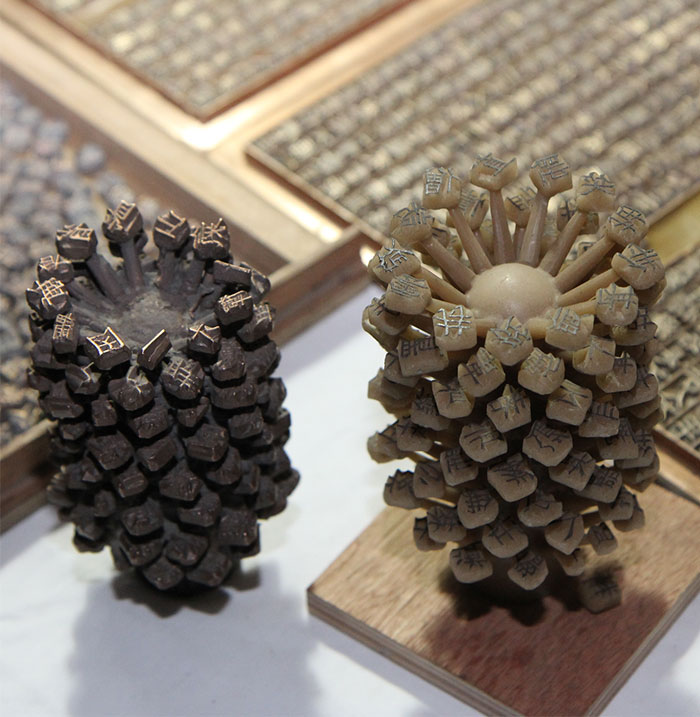 Records on the use of movable metal type

It is not easy to date the use of metal movable type during the Goryeo period, but one available reference is Detailed Rituals of Old and New (Gogeum sangjeong yemun), published before 1234. Unlike the paper and woodblock printing introduced from China, Goryeo’s movable metal type developed differently from China’s and its originality has been recognized. Despite the differences in the actual types, understanding of type printing and materials used for it, it is worth examining records on type use in Song China.

The production of movable type during Song China is documented in Meng Xi Bi Tan (梦溪笔谈) by Shen Kuo (沈括, 1030-1094), which detailed the earthen movable type made by Bì Sheng (畢昇) during the reign of Emperor Renzong (r. 1041-1048). The Chinese earthen movable type was not durable as it was made of earth. It needed adhesives such as resin and beeswax to fix the type onto the panel and this method was eventually abandoned due to its impracticality. Nevertheless, the basic concept of printing using individual types was not much different from that of the movable metal type of Goryeo.

As mentioned above, records on the use of Goryeo movable metal type was found in the postscript of New Edition of Detailed Rituals of Old and New, which was included in Part 2, vol. 11 of Collected Works of Minister Yi Gyubo (1168-1241). According to the postscript, King Injong (r. 1123-1146) ordered scholars including Choe Yunui to publish Detailed Rituals of Old and New. Later, as some of its contents were omitted or some characters were illegible, the king had two copies made and had one sent to the Ritual Bureau and the other to the house of Choe I for storage. During the Mongol invasion of Goryeo, the copy at the Ritual Bureau was not brought to the temporary capital in Ganghwa Island and only the copy at Choe I’s house remained. Then, the king ordered 28 copies of the book to be produced using cast metal type and distributed to each government office. During the invasion, it would have been almost impossible for the dynasty to invent a new type or upgrade the existing one, and thus it could be assumed that movable metal type began to be used in Goryeo between 1234 and 1241, the period between the transfer of the capital to Ganghwa Island and the death of Choe I. Dominique Barjot, a French scholar, attributed the invention of movable metal type in Goryeo to the Korean scientific tradition of adopting advanced science and technology from China and developing them in line with local needs. He pointed out that the establishment and operation of educational institutions specializing in printing was another contributing factor. In addition, Barjot asserted that economic prosperity and the prevalence of Buddhism in Goryeo accelerated the development of printing technology.

Jikji(dʒɪkdʒiː) printed in the Heungdeoksa Temple Site in Cheongju, a documentary evidence of movable metal printing

Jikji, the world’s oldest extant book printed with movable metal type, is the most empirical documentary evidence of the movable metal printing of Goryeo. This work was introduced to the West through its inclusion in a compilation titled Korean Bibliography (Bibliographie Coréenne) by French linguist Maurice Courant (1865-1935). In 1972, Jikji(dʒɪkdʒiː) was on display at a book fair held in the National Library of France in commemoration of International Book Year. The end of the book bears the caption, “This work was printed with cast metal type at Heungdeoksa Temple outside Cheongju Magistracy.” This proves that movable metal printing took place at a local temple in the late 14th-century Goryeo and the possibility that the invention of Korea’s movable metal type could be dated back to the early 13th century or even earlier.

Movable metal type of Goryeo: The foundation of cultural prosperity in Joseon

The movable metal type printing of Goryeo was handed down through to the Joseon dynasty, from its founding period of King Taejo and Taejong and the cultural golden age of King Sejong, finally to the reign of King Seongjong, when Joseon’s systems and institutions were reinforced. Throughout these changes, the dynasty was able to reach an era of cultural prosperity. The early days of Joseon saw the invention of the gyemi, gabin, and gyeongja fonts, among which gabin font, in particular, was recast several times through the times. During the reigns of King Sejo and King Seongjong, various fonts of type were also made and used for printing books, and after the 15th century, jeongu, imjin, and jeongni fonts were also made, demonstrating the continued cultural development of Joseon.